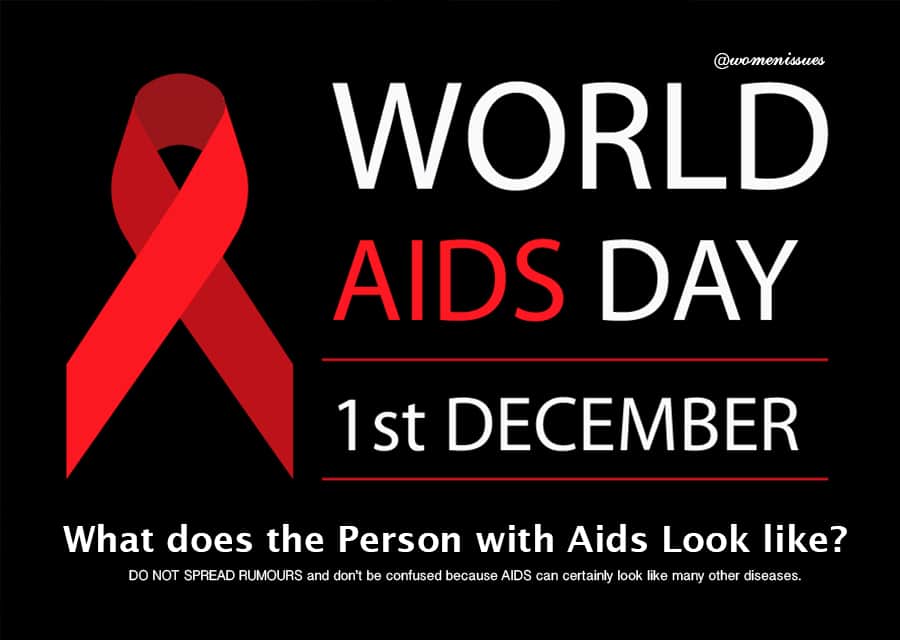 December is AIDS Awareness Month. A month that is a key opportunity to raise awareness, to assist us in developing better courage of knowing our statuses, to stop the stigma & it allows us increased access to treatment and prevention services.

What does the person with AIDS look like? Do you know? Let us look at this pandemic differently. We heard a lot and said a lot, most probably what you said might be complete rubbish because you think you know. What did you ever learn from don’t judge a book by it’s cover? Like you might have already judged my topic without getting into the contents.

DO NOT SPREAD RUMOURS and don’t be confused because AIDS can certainly look like many other diseases. You can never be sure or say it is AIDS unless it is confirmed to you by the person infected or by the qualified medical person should you suspect you are also infected. Let us take the journey to check few diseases that many mistaken them for AIDS without proper facts.

Alcoholism can look like AIDS
alcoholism is a chronic controversial disease that has negative effects on both body and behavior. It weakens the person’s immune system, damages the liver and affects the brain which can lead the person to look the way that people will automatically believe that they have AIDS. The effects of regular consumption of alcohol have that much effect on the person’s appearance.

Is it AIDS or Malnutrition?
this disease needs no explanation as I know we have seen how people with malnutrition look like way before HIV/AIDS was such a pandemic. Malnutrition can cause physical or mental disability and one of the symptoms is weight loss when is left untreated. It is sad that when it happens somewhere in Africa we believe it but if it is here around us we automatically declare AIDS. We cannot help our own with proper food because we judge that they are infected.

Cancer or AIDS
A painful journey that takes a lot from a person both mentally and physically. Cancer causes both short term and permanent physical changes. A nagging cough might be another one of the symptoms. Due to treatments like chemotherapy and radiation a person may have weight loss and skin discoloration amongst other changes. At times you can have weight gain and that’s where we hear people say “you see now he/she is on the ARV hence the weight gain”, what a sad thing!! Our reaction towards the physical change of a person with cancer as a family or friend might make or break the person. Watch how you react, be kind and supportive.

Measles
one of the measles symptoms is a rash. It consists of small red spots some of which are raised slightly and they spread on your body affecting the appearance of the skin. Normally the face is the first target before it affects the body. The other two symptoms that might be mistaken as AIDS is the persistent cough and the small white spots with bluish-white centers inside the mouth. Beware while you sitting next to the person with measles and busy judging that it spreads before the rash even appears. You might be next & nasty unnecessary gossips will turn on you because it is airborne, spreads by skin contact as well as just touching the contaminated surface.

TB can certainly look like AIDS
not everyone with TB has AIDS. The one best-known TB symptom is persistent coughing. It affects the lungs and can be spread through the air. Patients can experience extreme weight loss due to loss of appetite while according to study a small percentage will have anorexia. According to the World Health Organisation (WHO), South Africa is one of the countries with the highest burden of TB.

Typhoid looks like AIDS
inclusive in the symptoms is diarrhea, loss of appetite, weight loss, rash, cough and it remains a serious health threat especially for children. Due to all the symptoms, your body may undergo drastic physical changes that may look like AIDS.

Looking into the diseases mentioned above you can conclude that AIDS can really look like many other diseases. A person living with AIDS and a person with any of the disease can look exactly the same in their physical appearance. At times a person with these diseases can look far worse than you can think of. All these should teach us to stop the assumptions and educate ourselves and each other. Most importantly ditch the stigma and stop spreading rumors. we all know bad news or LIES spread as quickly as lightning and affects people’s lives negatively.

**SPREAD THE LOVE & THE KNOWLEDGE NOT THE UNFOUNDED CRAP**