SIGNS THAT MAY INDICATE A RETROVERTED UTERUS 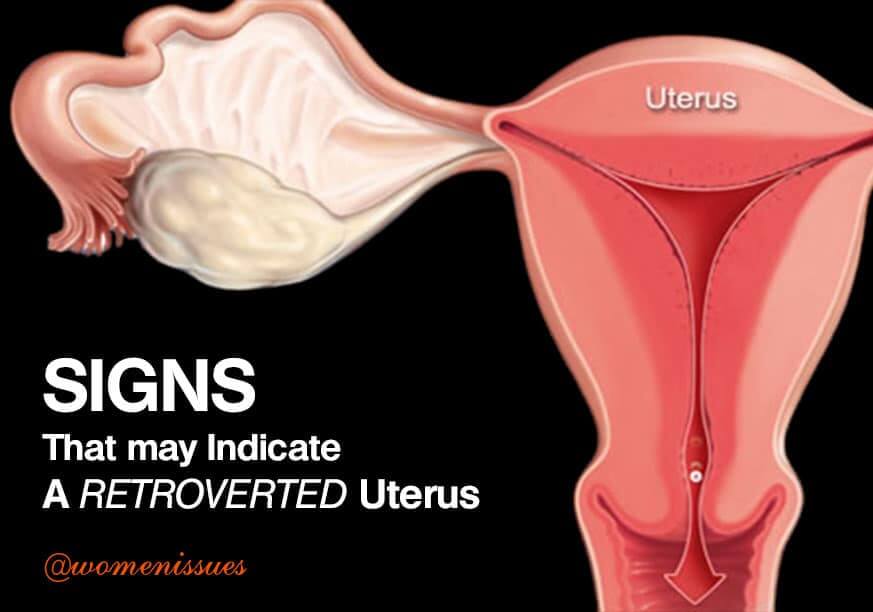 Inability to use tampons or menstrual cups

You might experience a slight or mild problem with holding your pee. You might pee on yourself a few times. Please note that urinary incontinence is not necessarily caused by a retroverted uterus, there might be other causes behind it. Feel free to consult your doctor if urinary incontinence poses a big problem.

Retroverted uterus may worsen the existing urinary tract infections or it might start the UTI problem.

Some people might naturally have hard stools but having a retroverted uterus will cause you to suffer a little more that you naturally would.

What can cause a retroverted uterus?

Endometriosis is when the uterus lining called the endometrium grows outside the uterus. The endometriosis tissue will then grow on the ovaries, fallopian tubes, bowel & your pelvis causing severe menstrual pains, irregular periods & painful sex.

Allow me to share this piece of personal information with you. I am a mother of three who has always endured the pains of endometriosis and never had a problem conceiving any of them. I only found out about the retroverted uterus on my last hours with my third child. My endometriosis was severe long before I could think about having the third one, the first kids were naturally born but with the third one, my obstetrician(OB/GYN) had to take me to theatre for an unplanned cesarean section. Never had a problem before & would not confirm if the tilted uterus was caused by endometriosis or it has been like that naturally & didn’t find out before.

The retroverted uterus can also be compounded by pelvic inflammatory disease (PID). PID is an infection of the female reproductive organs & it occurs when the bacteria is spread from the vagina to the uterus, fallopian tubes & ovaries.

Ligaments may weaken during menopause and will not be able to keep the uterus in the correct position and might lead to having a sudden repositioning of the uterus.

To find out if you have a retroverted uterus you have to go for a pelvic exam & if you experience too much pain during sex, it is best to let your partner know so you can work on suitable positions. Naturally, a retroverted uterus should not interfere with getting pregnant but a combination of it with other problems like endometriosis might turn it into a difficult & long process.

Please note that the retroverted uterus is natural with other women while it can tilt or change position with other women as they grow due to other factors such as the ones mentioned above. Our uterus sizes are slightly different and can lie in different positions from one woman to the other.

20% – 30% of women have a retroverted uterus. While others are very lucky with no symptoms or signs at all, other women do suffer one or more of these painful experiences. Do not suffer, get yourself checked and ask professionals to advise you on either what exercises to do to lessen the pain, any treatment, therapy or surgery for repositioning the uterus.