Signs of an insecure boyfriend 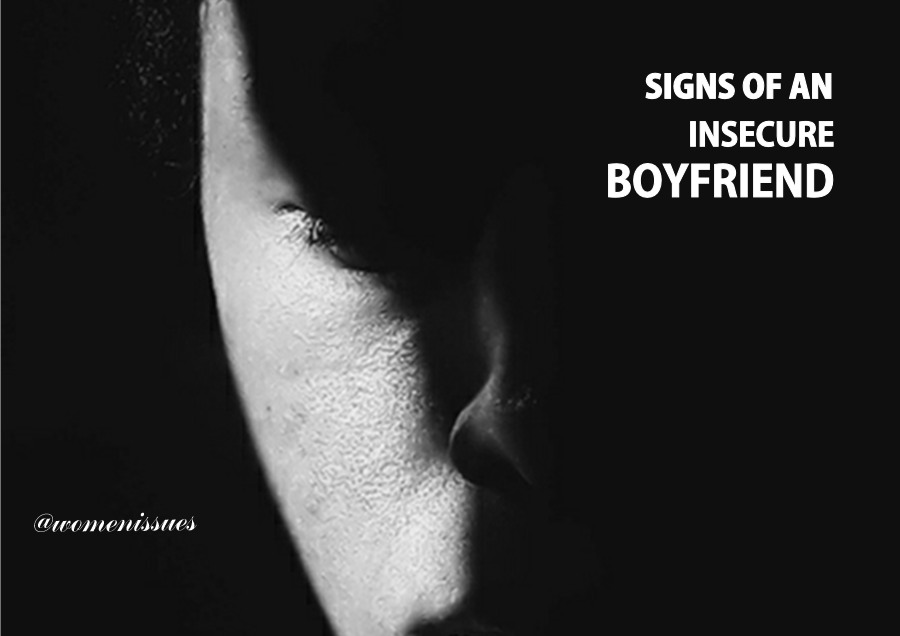 However, when you have an insecure boyfriend, things can get a little complicated to deal with. You might be wondering how you would even know if your boyfriend is insecure and let me tell you, there are a lot of ways to figure it out. More than likely, you are reading this because you have already picked up on the fact that he has some issues going on. Here are some of the signs to look out for:

He gives you no space.
When you are in a relationship, one is allowed to have a certain limit of personal space. You are not obligated to spend every second of your relationship practically glued to each other. At the end of the day, not everything is going to revolve around you two and you will have to carry on with your life outside of the relationship. He is not willing to accept that. He will show up at work or your house unannounced several times. not giving you space is one of the signs of an insecure boyfriend.

You will find it cute the first few times but after a while, it just gets creepy. You will barely ever see him with his friends or family, he will just be around you. Honestly, it is not because he has to be there to look out for you or anything. He just wants to be there because he is insecure about where you two stand at the moment. After a petty fight, he will show up unannounced in an area where you will feel incredibly uncomfortable because of him.

He gets jealous easily.
Jealous is a surely one of the signs of an insecure boyfriend. He will get upset when you talk to or even about other guys. He might get upset, actually tell you that you can’t talk to some guys, and he might even accuse you of being unfaithful simply because he is dealing with some insecurity issues of his own. Over-analyses the situation and change it from something meaningless to something with a hidden meaning. You are over there telling him for the billionth time that there is nothing to worry about and he is refusing to accept that. He might outwardly accept it so that the day can go back to normal. Yet, seeing him again will make bring out the green-eyed monster all over again.

He will get aggressive.
After jealousy, it is time for aggression which is another manifestation of an insecure boyfriend. The guy who you saw as a sweetie, who wanted nothing more than to spend time with you, disappears completely in those fights. He will bring up complete and utter nonsense from weeks or even months before! He will act like that was something burning a hole in him since that time. As if he will never forgive you for it even though the scenario was made up in his mind. You will see how he gets mad when a guy does make a pass at you. The odd part is that he won’t blame him as much as he will blame you. Like, you were someone only he is allowed to have feelings for and when some other guys show feelings for you, you started it & cheated on him.

He needs constant reassurance.
You two are in a relationship because you confessed your feelings for each other. Hence, you have told him that you do like him. However, he needs you to say it over and over again and not in the romantic way you think. Your boyfriend wants you to repeat telling him every single second of every single day that you do not love anyone else except him.

For most people, if their partner is not sincere with them, they will walk away and never look back. They will know that it didn’t end because of them and that is assurance enough. Yet, an insecure boyfriend would need you to remind him that you love him. Not because he denies the fact that you are not sincere with him, but because they think you will change your mind any second. You can’t exactly blame them for this, but they need to understand that this is can drive people apart.

He has a lot of unnecessary questions about the men in your life.
Your ex, the guy next door and your best friend are not people you are attracted to. You are in a relationship with him, but he wants more. It will start small with him wanting to know why you are talking to them. He will act like he just asked that as a matter of fact-lay. Then it will move on to more unnecessary questions and he will change his tone. Like, you are doing something wrong.

He will think that you still have feelings for them or have somehow just developed those feelings while being in a relationship with him. He will think that anyone you talk to is automatically someone you have a crush on. It will be a constant annoyance trying to convince him that you are not attracted to any of them. What is worse is the fact that he will somehow remember to bring it up during a fight and imply that you are cheating on him.

He is a little too obsessed with you.
Everyone likes to be pampered and feel loved and that is natural, but as I have mentioned above, there is a thing such as suffocating love. No one likes to be suffocated and to think love could suffocate. They modify their way of living to give priority to you. You would think it is sweet, but it is not. A relationship can form pretty easily. However, it can be difficult to maintain that relationship.

In this way, they are progressing far ahead and you are not ready for that. There is a time for everything but they think that the time is in a couple of seconds instead of a couple of years. This puts you in a tight spot. No one likes to be made to choose at the moment. You need to think before taking a single step because then they will overthink it and it will burn a hole in them. So, on one hand, you are looking out for them whilst on the other, they are making it hard for you. You need to have your personal space that even your partner is not allowed to invade that.

He wants you to tell him every single thing.
This is another one of the signs of an insecure boyfriend. They might be things you are uncomfortable talking about or things you just don’t think are that important to say. So, you think it is best not to tell them. However, they won’t have it that way. They will continuously nag you about it until you tell them. They think that just because you two are in a relationship, you are entitled to tell him absolutely everything.

You are not entitled to tell him anything unless you feel like it. These are not terrible things which have to be said, so him making a big deal out of it is completely unfair to you. Yet, in his mind, these are things he needs to know because it somehow benefits the relationship. When in fact, it just boosts his assurance.

All the above are signs of an insecure boyfriend and that will reveal itself in how he acts, how he reacts and how he responds when he is with you.