Should a man have a Wife and a Mistress for pleasure? 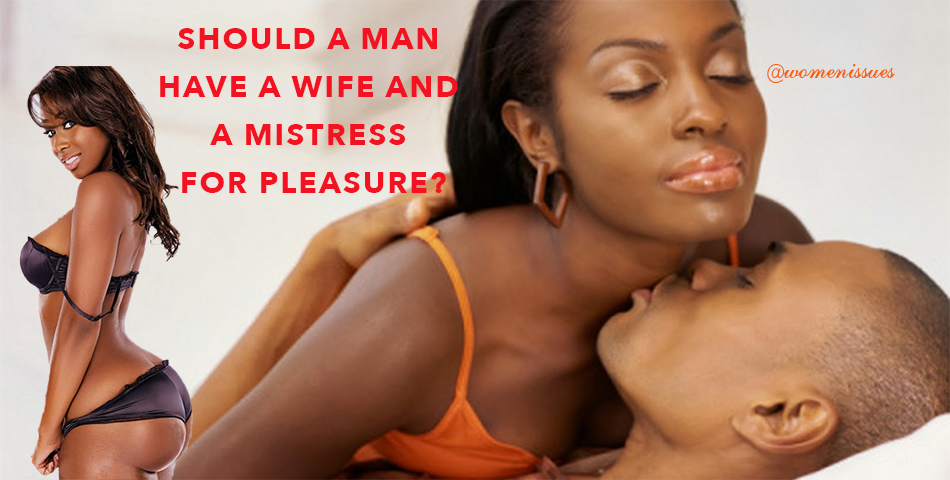 It seems to be a norm and a way of life today for most relationships to have more than two people in it. Some women do not want to be in polygamous relations but they find themselves in the situation without their knowledge. We see pastors having their share in it illegally as well while they preach otherwise and saying to people polygamy is wrong. What is polygamy and does it only apply to marriages? Does having a mistress for years not the same as being in a polygamous situation? Some actually prefer to be in one in an attempt to have healthy relationships or to avoid mistresses. Does polygamy influence healthy relationships? Or is it just an easier way for men to openly have more women or for women to have what doesn’t belong to them? What is your take on the matter as a woman? Do you prefer to be a wife or a mistress? Funny how other women refuse to be in a polygamous marriage but would gladly cheat with a married man.

Wives are boring women who nag and bring nothing but a headache and a feeling to drive a man away from his home and have nothing to offer sexually and when they do they bring a whole lot of clothes to bed to perform as part of their own wife duties or house chores. A mistress is fun, active, ready to explore, always in the mood, boosts the man’s ego and spontaneous and all the things that make a man want her. A situation like this makes a man have his pleasure out there and comes home to also just perform his husband duties in the house and not much worried when the wife comes with the complaints and excuses. A reality that happens on daily basis but women must realize that getting married is not a one-way ticket to a dead passion place that sucks the fun out of you. You start acting like an old woman then remember there are so many women out there willing to give him pleasure with the intention to either take over or for benefits that comes with it. “Roll-on eliminates bad odours by keeping us fresh all day everyday”

Who is treasured the most between the two? Who is lied to or made a fool of between them? Loyalty cannot be divided. So many questions and still no right answer, is there? Most of these questions are answered based on people’s beliefs, culture, religion and just a need to satisfy a personal preference. It is believed by most that a mistress makes a man’s family unit strong; she helps to keep the family together. The big question is, does a wife give no pleasure? If not then why did it come to marriage? Where do we go wrong as women? Whose fault is it anyway? No matter how much we want to justify it, it is unethical, wrong and it hurts people and it breaks family units. It is an act condoned by lust; it’s selfish and it shows a lack of respect for the chosen partner.

Sometimes and a very small percentage of the mistress situation tends to change to a wife situation and that can only mean the will be a polygamy or divorce. But the other question is should you marry the man you were a mistress to how are you going to cope knowing that history might just repeat itself? Remember karma is a bitch and always a bitter pill to swallow. We are a society that has allowed this “NORM” to be a correct way of life but when something is a norm doesn’t automatically make it right. No wrong can ever be right so we should stop confusing a norm with what is right. Who said normal is right? Either way, a situation like this hurt people and destroys families. A woman is a cause of all these and she can be the solution to end it all as well but it is unfortunate that a lot prefer to be and stay mistresses. Some women are mistresses without their knowledge but when the truth comes out is not all who are willing to let go. Others even fight to take over the wife position with disregard of the consequences.

Should a man have a wife and a mistress for pleasure?

It is not always a woman’s fault but when we say men are dogs we are also shifting the blame to not taking responsibility for our own actions. Before you say it bear in mind that married people should meet each other’s needs so you should check what you did that let him be the dog he is. If nothing then you can gladly say it. Be the woman whom he will feel guilty for cheating because he knows he is a bastard with a great woman and no reason to cheat. Unfortunately, mistresses are here to stay and it is up to every woman to make a choice to be one. A wife, a mistress or both?

It is a norm that wives are boring and lack to deliver accordingly in the bedroom. But what comes to mind is, let us take a look into a man and a woman both married but both cheat their spouses, how do we explain that one? The man has a wife at home while the woman he cheats with is a wife somewhere else. This man is surrounded by two wives, though the other is just his kept woman. The point here is, are wives really boring or we are just used to indulging and enjoying the forbidden fruit.

Tags | a mistress, a wife, SHOULD A MAN HAVE A WIFE AND A MISTRESS FOR PLEASURE ?
0 1