JEALOUSY IS A BITCH 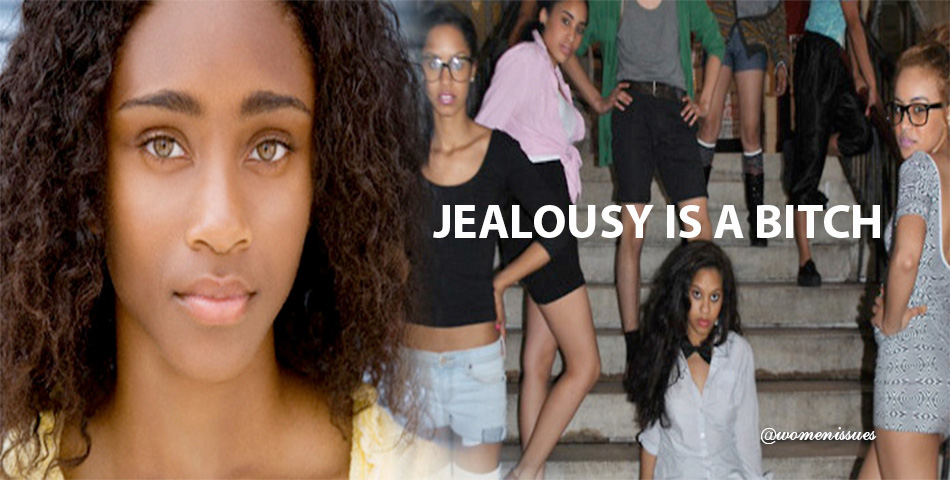 JEALOUSY IS SELF-TORTURE
Every action produce results, we have jealousy and inspiration whereby the first produce negative results while the latter produces the positive ones. A Petty woman will choose the first while a go-getter chooses the latter. Acting out of fear is jealousy, jealousy means you are threatened, a feeling that another is better than you, either by looks or even achievements. Jealous women lack accountability, discipline, vision, sense of pride, self-acceptance, lack of passion and focus for their actions. Jealous women don’t have dreams they are only driven by a need to look better and sound better. A hater is a woman who bad mouths another because of jealousy in an attempt to make herself feel better. Jealousy is like regret, the two are a wasted energy that is channeled the wrong direction. It consumes inside, breaks up self-confidence, friendships and family relations and takes away self-worth. It contaminates with self-pity, self-doubt, bitterness and negative talk. I call it unchanneled energy because it takes a lot of energy to be jealous because it requires effort and time to keep track of the person one is jealous of but if it is redirected then the results would bring about so much growth and I say it is misguided because the reason behind is only persuaded by feeling of needing to be better than the other person.

A man is the head of the family but a woman holds the family together. She brings honor, order, happiness, love and togetherness but a jealous one will bring the opposite of all that bringing misery to family units. I can’t wait for the day when women do things for their own good not because they want their enemy to see them flourish. Doing things because people are watching is not good enough reason to make it in life. How about proving a point to you? Erase haters in mind, erase competition with other and compete with yourself. You can never be a better version of someone else, strive to be you and a better you not better than. We were all wired differently and we all have our bad and better attributes in us. We are bitter because we are driven by jealousy and we believe we have to be better and look better. The passion inside of us is suppressed by all the negatives and the only concern is what others think, why others do better and others think they are better. Jealousy makes people see things that aren’t there and leads to hatred. We are not best of us due to trying to do the same as the one we are jealous of in attempt of doing it better. How about doing you? Discover your own talents and should you discover you genuinely have same talents as the next then do it your own way because only the best of you will flourish through true genuine you.

JEALOUSY IS A BITCH

Jealousy is when you sit and start counting and hating on what the other woman is busy achieving and doing with her life. When that happens then you start fabricating and speculating and attempting to destroy someone’s character. It starts with gossip and bad thing about gossip is that ignorant people start believing and that might destroy a life or taint a character. But who needs ignorant people around them anyway? Women like this don’t stand for something so they will easily fall for anything. That is time wasted, time that can be utilized to discover your capabilities and maybe instead of hating how about approaching that woman and seek advice? Talking nasty all the time is evidence of jealousy makes a person sound and look stupid. When the bad mouthing syndrome starts, learn to listen to yourself because you might actually learn something new. We are big in preaching but never women enough to take a stand for our own words. We are big in posting all those inspirational quotes but we never mean them. That is an act of hypocrisy at its best, saying one thing for the world to think different about us but acting the other way. Helping the other woman is just another sign of proving how confident you are and how mature you are about understanding that we can both make our own mark.

Why do we always believe when a woman speaks rubbish about the other woman rather than reserving bad comments and start judging character on our own if given a chance? You can never see the real character if you approach with what was fed in your mind. It is sad and true that a woman will only bad mouth you because she doesn’t want other people to see the best they see in you or they do it simply because they can’t stand what is right about. We fail to think because it is easier to sit back relaxed and discriminate. Be a thinker but be able to notice between being influenced by positive thinking or a negative one because a negative thought will never ever give you a positive outcome. Choose to swap jealousy to learning something from the successful ones and that will be the most intelligent approach.

Jealousy itself is jealous of us and that make it our number one enemy invited and welcomed by us. It deprives us of finding ourselves, our capabilities, our talents, and the best of us let alone the beauty we can offer to us or to the world at large. Life is a journey so when are you going to start your journey while you busy hating on the next woman? Ever thought that your hating and bad mouthing never stops her from shining? Jealous or not her shine will not go dim, her success will not lessen, her achievements will not be affected, her worth will not deteriorate, her dreams will not die, her plans will never need your approval and most importantly she will not lose herself in your jealousy because she is untouchable backed up by self-confidence, competence and believe in herself and her purpose in life and her lack of your envious discrediting interest in her life. Confidence has no room for jealousy or hatred for other women or care of what others think, NO, confidence has no room to sit and be jealous of the other it is only worried about making shit happen and allowing failure in order to try again and learn and grow and do better.

JEALOUSY MEAN YOU ARE WEAK MINDED
I love to say women are most vulnerable to all funny diseases because of the element of jealousy in them. Don’t worry about what the other woman is doing instead be prepared to look up to her for inspiration. By so doing you eliminate the possessive spirit of hatred, insecurities, intimidation, sadness, bitterness, misery, resentment, stress and anger. Those who are not jealous benefit the fruits of a confident woman because they are inspired and not shy to ask for her assistance and are willing to climb the ladder alongside her and willing to climb and fall and get up and go at it again over and over till they climax. Linda Ntuli one of the inspirational people I have known taught me that “chance favors the prepared”. Not the weak and the meek and this means being prepared mentally. Mental uneasiness is a weakness and a disease that stands in a way to a great life, it has an advantage over our lives and it shapes our future. A weak mind is self-torture, it is always on holiday, it is destructive and looks for an easy way out all the time. When another woman comes up with an idea the weak minded one will say I could have come up with a better idea but reality is it never comes a period, it waits then it condemns and discredits.

Jealousy is a thief, it is painful, unwise, buries your vision, deprives, it is time-consuming and it kills. It leads to wrong decisions ultimately regret and makes the mind weaker as it leads us to believe we can handle things that we actually cannot. We find ourselves in the deep seas while we cannot swim or in deep dark holes with no plan or energy to get back up. Jealous women have weak minds and will never try anything because their inspiration comes from seeing other women’s progress. If no one progresses that means there is no reason for them to try, their misguided intentions kick in only when there is action from others, they are forever followers and never set trends. They don’t know their purpose in life and will possibly never find it.

I have come across so many women who can loudly talk nonstop but all they do is make noise with their weak jealous minds of nothing but talking bad behind other’s backs. They make so much noise they can’t even hear themselves talk. But please do give them a chance to talk wisely and explain where they are heading in life and how they plan to achieve all that, and then they suddenly go mute. They hide behind the loud nonstop talking because they have absolutely nothing great to offer themselves let alone the next woman. Their fulfillment comes from hating with a Life of no purpose that is meaningless and empty. Talk is cheap but listening is a beautiful skill. Don’t just say you are a strong confident woman instead strive to act it and naturally be it. Ultimately jealousy makes us nasty, it looks bad on us and it is bad for us. Don’t hate what you don’t understand.

**GREATNESS HAS NO ELEMENT OF JEALOUSY AND IT COMES FROM WITHIN**