FOOD THAT MAY HELP PREVENT CANCER 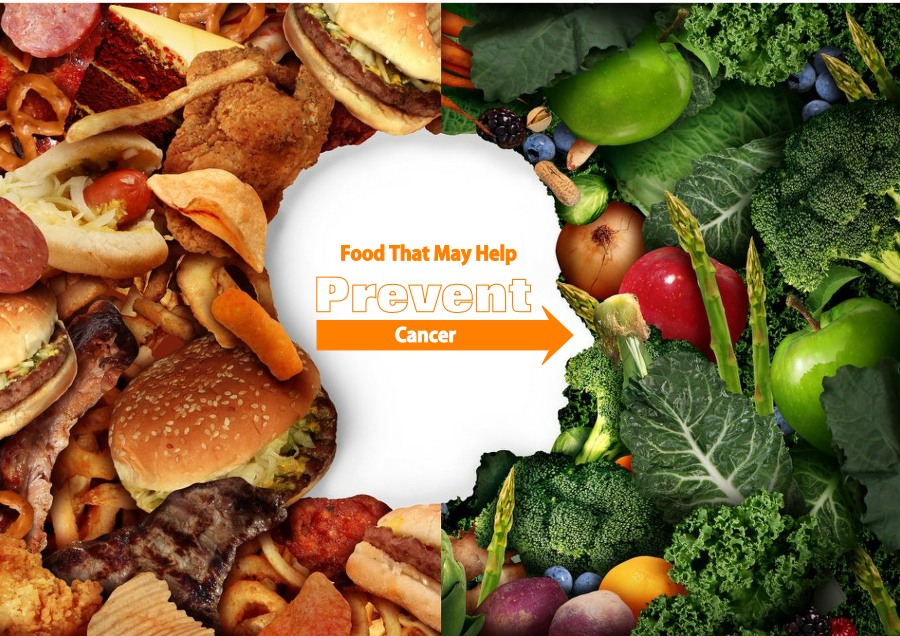 Food That May Help Prevent Cancer
We can start by defining what cancer is: Cancer is the wild growth of abnormal cells in the body. Cancer develops when the body’s normal control mechanism stops working. Old cells do not die and instead grow out of control, forming new, abnormal cells. These extra cells may form a mass of tissue, called a tumour. Many people believe that getting cancer is purely down to genes, fate or bad luck. But through scientific research, we know that our risk actually depends on a combination of our genes, our environment and things to do with our lifestyle. four in ten cancer cases could be prevented, largely through lifestyle changes including diet. Here is some food that can help one to prevent cancer:

1.     Green Tea
Some laboratory studies have shown that extracts from green tea can stop cancer cells from growing. Green tea contains substances called polyphenols, and a subgroup called catechins, which scientists think gives antioxidant properties. But while these lab results are encouraging, more human studies need to be made to make those results 100% accurate. One thing we know as a fact is that green tea is drunk widely across Asia and the rates of many cancers are much lower in Asia than in other parts of the world. Not convinced? Green tea is antioxidant and therefore very good for your body anyway so make sure you drink at least one cup a day. It can improve your digestion, your cerebral functions, and your mood.

2.     Tomatoes
The research revealed that men who ate more than 10 portions of tomatoes or tomato products per week have an 18% reduced risk of prostate cancer compared to men who ate less than 10. Tomatoes contain a particularly high concentration of an effective antioxidant called lycopene. Lycopene is released when the tomatoes are cooking. You can use tomatoes in plenty of dishes, we actually have a delicious vegetarian lasagne recipe that you should try!

3.     Olive Oil
Another ingredient some people love to add to their recipes is olive oil. This monounsaturated fat is widely used for both cooking and salad oil and maybe a cancer-fighting food. Eating a healthy diet with olive oil as the main source of fat could considerably lower cancer incidence. Studies revealed that oil could help prevent breast and colon cancer. Olive oil is full of vitamins and antioxidants that help the body eliminates the toxins responsible for damaging our DNA and induce cancer. Make sure you buy qualitative 100% extra virgin olive oil.

4.     Broccoli
These mini trees are notorious for being pushed off the plates of kids around the world, but broccoli’s reputation as one of the healthiest veggies still rings true. Eating a high amount of cruciferous vegetables has been associated with a lower risk of cancer; particularly lung and colon cancer. Studies have suggested that sulforaphane, the sulfur-containing compound that gives cruciferous vegetables their bitter bite, is also what gives them their cancer-fighting power. So, including broccoli with a few meals per week may come with some cancer-fighting benefits.

5.     Garlic
Research shows an association between increased intake of garlic and reduced risk of certain cancers, including cancers of the stomach, colon, oesophagus, pancreas, and breast. The protective effects from garlic may arise from its antibacterial properties or from its ability to block the formation of cancer-causing substances, halt the activation of cancer-causing substances reduce cell proliferation, enhance DNA repair or induce cell death.

6.     Blueberries
Several researches show that the blueberry extract makes cancer cells more sensitive to radiation, but it also reduces the abnormal cell growth that fuels cancer development. While further studies are needed, the researchers say that their findings indicate that blueberries may be a promising treatment strategy for cervical cancer and other cancer types. You can also consume blueberries juice.

7.     Whole Grains
It is a good option to choose whole grains over refined grains which lower the risk of diabetes and heart disease. Research revealed that a variety of healthful compounds in whole grains combine to make these foods high in potential anti-cancer activity. So, when doing your shopping, pick whole flour, whole wheat, brown rice, Buckwheat, Bulgur, quinoa, whole-wheat couscous, and corn. Yes, corn is healthy for you when it is whole, so treat yourself with popcorn also.

8.     Grapes
Both grapes and grape juice are rich sources of resveratrol, a phytochemical well studied for anti-cancer effects. The skin of the grape contains the most resveratrol. Resveratrol is in red, purple and green grapes, the amount depends much more on growing conditions than on color or type of grape. Some researches pointed out resveratrol’s ability to slow the growth of cancer cells and inhibit the formation of tumors in the lymph, liver, stomach and breast cells. Resveratrol has also triggered the death of leukemic and colon cancer tumors. Red wine also contains resveratrol. However, alcohol is associated with increasing the risk of many types of cancer so don’t take this as an excuse to drink more! It is also worth knowing that grapes contain more pesticides than any other fruits.

9.     Green Leafy Vegetables
Leafy green vegetables like spinach and lettuce are good sources of the antioxidants beta-carotene and lutein. Some lab studies have found that chemicals in these cancer-fighting foods may limit the growth of some kinds of cancer cells. Researchers believe that carotenoids seem to prevent cancer by acting as antioxidants. Some laboratory research has found that the carotenoids in dark green leafy vegetables can inhibit the growth of certain types of breast cancer cells, skin cancer cells, lung cancer, and stomach cancer.

With the increasing number of researches being carried out it has been clear that one’s diet is directly linked with the risk of cancer. So, it is very helpful to have a diet rich in whole foods paired with a healthy lifestyle in order to improve many aspects of your health.