9 SIGNS THAT SHOWS YOUR PARTNER IS A NARCISSIST 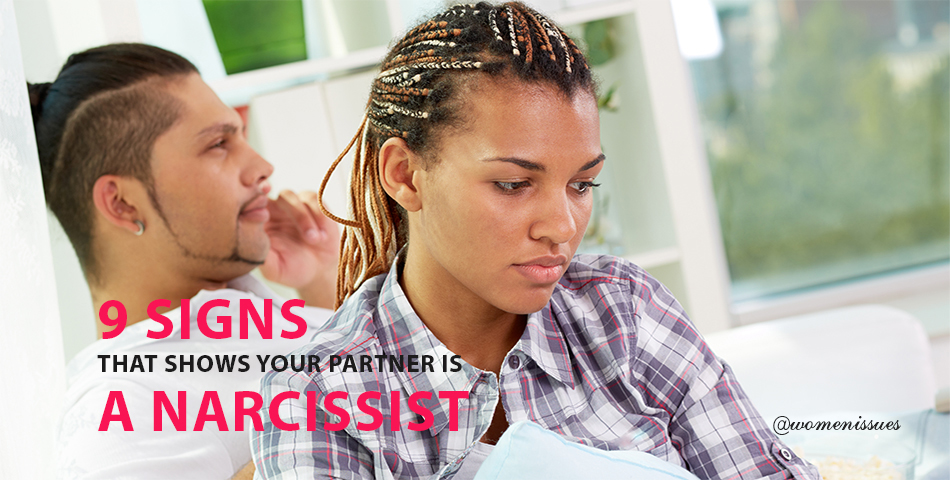 Narcissism is a real personality disorder interpreted as a person who’s in love with himself or herself.  At first, a narcissist will appear to be someone who just has a lot of confidence but because they worship themselves, it will be easy to notice them soon. Most of us can be guilty of some of these behaviors once in a while but a pathological narcissist tends to dwell habitually in several of the following personas while remaining largely unconcerned with how his or her actions affect others. How do you know when you’re dealing with a narcissist?

#1 It’s all about me
In conversations, a narcissist will not only quickly interrupt your conversation but he will make it all about himself. He always wants to dominate the conversation irrespective of what you are talking about. A narcissist feels more important and believes the other partner is merely there. They go on about their personal issues, their achievements, concerns, and looks while putting others down.

#2 I’m always right
Narcissists are quick to blame and they are slow to appreciate. They are unwilling to take responsibility for their mistakes with a tendency to blame others when anything has gone wrong. They find it difficult to admit blame. Narcissists are often quick to judge, criticize, ridicule, and blame you while some are emotionally abusive. They are never wrong!

#3 Lack of empathy
Since he is the only one who matters in the relationship, he is certainly incapable of putting himself into anyone else’s shoes but his own. As his partner, you may blame yourself for not being good enough to have earned his love and affection.

#4 Listening
Listening is one-sided, what the other partner says or want to seem to be not worth attending to. As he will always interrupt the conversation, he will either do all the talking or he just won’t listen

#5 Exaggerated sense of self-importance
They believe that are one of a kind special person and others cannot live or survive without their magnificent contributions. They start treating you like they are doing you a favor to be with you and acting like they are the best thing to ever happen in your life.

#6 Charismatic
When a narcissist is interested in you, they can be persuasive & make you feel very special and irresistible like the world revolves around you. He can show interest by going all out to be engaging & sociable but that will only last for as long as you’re fulfilling what he desires and giving him your attention. However, once they lose interest in you most likely after they’ve gotten what they want or become bored, they may drop you without a thought.

#7 Entitlement
If they’re not feeling like they’re getting enough attention, support or anything they feel they should have they’ll then display selfish behavior in the attempt of getting what they want. He has to own everything & control everyone. They feel compelled to be the best at everything they do, even if it comes at the expense of others.

#8 Manipulative
They will make you feel like you are ungrateful. Any negative thoughts or behaviors are blamed on you or others, whereas they take credit for everything that is positive and good. He will threaten to leave you if you don’t see things from his side. He will use guilt to get their way and they will do this with anyone around them, friends & family.

#9 Lack of responsibility
Narcissists always have to put a blame on someone or something when things don’t go according to their plan or not perfect. They want to be in control but they never want to be responsible for the results unless everything goes exactly the way they desired. They naturally blame the person who is mostly attached to them emotionally so as the partner you will be the victim of that. They cannot accept when they are in the wrong, they are convinced that nothing is ever their fault and to them, they are really innocent.

If you have ever wondered if your husband/boyfriend cares more about himself than he cares about you and your feelings you may be dating a narcissist. Narcissism is a skills deficit that makes a relationship unbearable. Let him get help, learn how to deal with this personality or simply get out/re-evaluate your future together because one day you will look at him or her & feel nothing. The problem is that being in a relationship with a narcissist, there will only be one person that matters and that will certainly not be you.

**NARCISSIST’S LOVE WILL LEAVE YOU CONFUSED AND UNHAPPY**

Tags | 9 SIGNS THAT SHOWS YOUR PARTNER IS A NARCISSIST, NARCISSIST
0 0